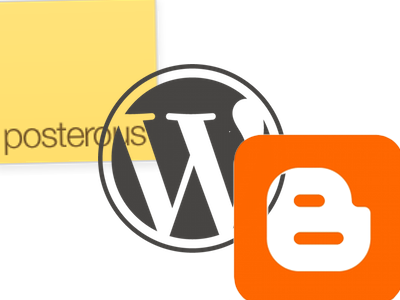 At the news that Twitter was buying Posterous, it was only a matter of time before the end would be announced, so I started reevaluating another solution for blogging.  I had written off Blogger for years since it was pretty primitive and lacked features that mattered to me.  With the further integration of Google + and clients on most mobile devices, I decided to go Google and give it a try.

In order to move from Posterout to Blogger you need to use Wordpress as a middle man first and then use an open source app called Wordpress2Blogger conversion utility.  Here are the steps:


Wordpress.org Import/Export:
Convert Wordpress Export:
Blogger Import:
The process sounds elaborate but the process is pretty fast and I was able to move 4 blogs in about 30 minutes so after the first one it is somewhat routine.  There are some differences with Blogger but overall there seems to be ways to do most of what I did before without too much hassel.  I do miss the simplicity of Posterous but as you know it had it's frustrations as well.  ~Lou
Posted by Unknown at 10:34 PM 2 comments:

When I started to publish code on GitHub I began searching for the best way to share my code without accidentially giving away my keys, passcodes or usernames. I tried to fork a version for publishing but branch history will still allow the public to see what was in previous versions. After trying a few methods, I opted to store all my passcodes in a *.yml file in config folder and just add it to the .gitignore. This required a few notes to let cloners know what to do with the code in the case they were to use their own keys directly.

Create a file under the ‘/config’ folder ‘ app_passwords.yml’

Now that the passwords are loaded into the Rails envionment, they can be called from the controller.

Now that the app’s sensitive data is located in a single place, the ‘app_passwords.yml’ can be added to your ‘.gitignore’ file and it will not be committed to GitHub (as long as you don’t have other commits to your code history). There are now two options for your README for letting users who download your code to change in order to use it with their own passwords.
This seems to get the worry out of the way and let you code and commit without worry (well at least after the first commit and check!). ~Lou
Posted by Unknown at 8:30 PM No comments: